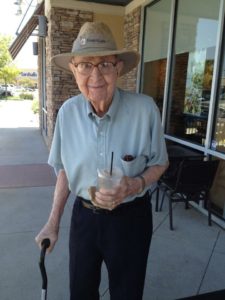 This is the story of a man who wanted to serve his country but never got the chance – because of sacrificial love.

We rode in silence. He had his thoughts. I had mine.

When my uncle died several years ago, I had the honor to be charged with the task of getting my 96-year-old grandfather, who I called Papa, to the funeral. My Papa lived nearly five hours away from the town where his son would be buried so we had a lot of time in the car together.

I had wonderful relationships with all four of my grandparents growing up but Papa was the last living one. His hearing was almost gone – even with hearing aides – so our conversations weren’t lively but they were filled with substance. Every time I was with him, I learned something from him.

But the day I drove him to his son’s burial, he learned something from me.

My uncle served two tours of duty in Vietnam and earned the rank of Captain – and a Bronze Star. We suspect he was part of the Saigon evacuation but he never really talked about the war. Those stories weren’t for telling.

My brave uncle was to be buried at the National Cemetery in San Antonio and as I drove my grandfather, he was quiet and thoughtful until he said, “One of my biggest regrets was that I never served in the military. I tried to. My buddies and I signed up and we were given a date to report. Your dad was less than a year old so before I could report, I had to move your dad and Gram back home to Lorraine to live with her family. My buddies left a day before me and shipped out. When I got there the next day, they told me their quota was full and they didn’t need anyone else. They sent me back home. I never got to serve my country and it is one of my biggest regrets.”

I looked over at him as he stared straight ahead. “Papa, I know why you never served. Don’t you know?”

“Well, they told me to go home. I never understood it.”

He let that sink in. “How do you know that?” he finally asked.

“When I was a little girl, I told her I would pray she would get her hearing back. I believed God could heal her deafness like He did in the Bible. She told me not to pray for her healing because she had made a deal with God one night many years ago. The night you left to go to war, Gram prayed all night. She told God if He would send you back to her and keep you from going to war, she would never ask to hear again.”

Papa never got to sacrificially serve the country that he loved because the woman he loved sacrificed for him. And he didn’t know. My grandparents were married for 59 years before my Gram died and she never shared the story with him.

Love cares more for others than for self.” 1 Corinthians 13:4 Msg

Growing up having a grandmother who was legally deaf was difficult. She wore hearing aides but still missed out on a lot of what went on around her. Without her hearing aides, she was completely deaf.

And she was okay with it.

She was okay with it because as a twenty-two year old wife and mother of a baby boy, she wanted her husband more than she wanted perfect hearing. She cut a deal with God. In my grandmother’s eyes, He held up His end of the bargain and she held up hers. She never again prayed to hear. And she didn’t want anyone else to either.

Two are better than one, because they have a good return for their labor;

if either of them falls down, one can help the other up.

But pity anyone who falls and has no one to help them up. Ecclesiastes 4:9-10 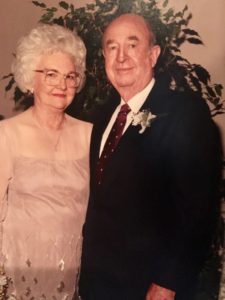 My Papa and Gram didn’t always have the best marriage but they were committed to each other. They fought – and they fought for their marriage. She gave up the desire to hear because she loved her husband. Gram never told Papa about her bargain with God because she knew he would never, ever want her to make such a huge sacrifice for him.

What about you? Do you have a story of an unanswered prayer or sacrificial love? Share it with me in the comments.