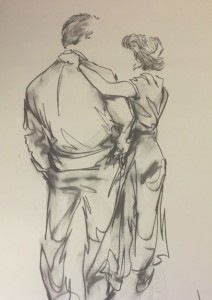 Three years into our marriage, I was about 4 months pregnant. We were the first of our friends to get pregnant and were determined a pregnancy and a baby wouldn’t impact our lives in a major way. (I can hear you parents laughing now!)

As part of our plan not let children impact our lives, we decided to meet at a lake to spend the weekend with our childless college friends. We picked a lake halfway between where we lived and booked a cabin. The cabin information said that it had a bed and a pull out couch. What it didn’t say was the bed was a full-sized bed and the pullout couch was a twin bed! Our friends graciously squished together on the twin bed and let my hubby and I take the bed since I was pregnant.

Oh, and we had our two large Labrador dogs with us! We spent a LOT of time outside that weekend.

At our five-year college reunion, we decided to share a hotel room with this same couple to cut down on the expense of the weekend. Sounded like a great idea until we factored in our 18-month-old, temperamental sleeper and the fact that our friends were seeing each other for the first time after a few weeks of separation due to work schedules. Not the greatest idea.

Thirty years of marriage and seven kids later, this summer we celebrated our 30th wedding anniversaries together. We are not only older but a bit wiser so each couple got their own room and we didn’t bring any kids!

After sixty years of marriage between the two couples, here are a few things we’ve learned – other than to get our own rooms!

Top 9 Marriage Tips: from the women (but it’s for the guys too.) Okay, it was supposed to be our top 10 but we overlapped on a few – and agreed on all. These are not in order of importance.

1 – Laugh – a lot and often. Books have been written about the importance of humor in a marriage. You cannot underestimate the place this has in a healthy, successful marriage. Happiness is a choice – and laughter follows happiness.

2 – Cultivate the same interests – If you don’t have the same interests, get some. Going to football games isn’t something I would do on my own – but I love going to them with my husband. Watching Gilmore Girls wouldn’t be something my husband would do alone – or, at least, I hope not. But he watched it with me. My husband doesn’t care about a garden but because I do, he is interested. I don’t really care about some of his hobbies, but I listen to him talk about them and try some of them.

3 – Be kind – I know that sounds silly to have to say but I have seen a lot of couples that aren’t even nice to each other. There have been times I haven’t been very nice to my husband – and vice versa – but we readjusted. The Gottman Institute did a study on predicting divorces and the bottom line came down to whether the couple was kind. You can read the study here.

4 – Be committed – I know that goes without saying but, apparently, it needs to be said. When my aunt and uncle celebrated 30 years of marriage, they contemplated how they made it that far. He said, “Every day I chose to come home and every day you were here.” I know that is simplistic. But we can all have days when we don’t want to go home – or stay home. We are all one fight away from a divorce. One fight that doesn’t get worked through and then another one comes – and another. Be committed to work it out. You might need to get counseling but work it out. (Note: if abuse of any kind is involved, please tell someone you trust and get help!)

5 – Communication – You’re probably thinking, “Duh, I know that.” But what we are talking about is mature communication. I can sit and “communicate” all day long but if it isn’t a mature conversation, it’s like wanting to be on the roller coaster but I’m on the merry-go-round. I’m going round and round – and probably getting sick to my stomach. Men and women communicate very differently. You have to be mature enough to recognize the differences and accept them. Sometimes it’s okay to agree to disagree.

My husband’s great aunt told me she would often go on and on about a subject and her husband would just listen. She would work herself into a frenzy and after awhile, he would say, “Okay, that’s enough.” And she knew it was. She was grateful he listened but didn’t get on the merry-go-round with her. He was there to patiently help her off. I’ve had many women tell me, “He doesn’t care!” He probably does but he doesn’t like the crazy merry-go-round.

6 – Sex – Don’t kid yourself about the importance of sex in your marriage. It is important. You know it is. He knows it is. Everyone knows it is. Tip: Read Dr. Kevin Leman’s book, Sheet Music: Uncovering the Secrets of Sexual Intimacy in Marriage (I imagine at least one of my girls wants to insert the monkey emojis covering its eyes and ears.)

7 – Don’t take things personally – Give each other the benefit of the doubt. Often we hear our spouses say something and we assume they meant to hurt us. Maybe they did. But chances are greater they didn’t. Maybe our spouses simply said something in the wrong tone because they were tired, had a hard day at work or home with the kids or weren’t feeling well. Give them the benefit of the doubt – and reread #5.

8 – Have a short memory – My husband and I joke that the reason we have a good marriage is that we both have short memories. But it really isn’t a joke – it is essential. Forgiving one another is key. If you do not forgive one another, bitterness and angry grows and can take over a relationship.

Forgiveness is NOT an option. The Bible is very clear about this. Matthew 6:15 says, But if you do not forgive others their sins, your Father will not forgive your sins. Work it out, let it go – and forgive.

Top marriage tips from the guys

I asked for their top three and got one. Seems about right, doesn’t it? They gave me several tips they say they live by – and then they laughed. Their tips were things like, “Apologize early and often” and “realize she’s always right.”

But seriously, the most important tip they could collectively come up with – and have modeled for the past thirty years can be summed up with…

HANG ON TO THE (bad word) ROPE!

At first, I thought my husband was trying to weasel out of the question but as we talked, I realized he was serious and he was right. Hang on.

(This is one of those examples were women can get all worked up, get our feelings hurt because they aren’t taking us seriously and shut down the communication. I asked for three tips from both of them and all I got was ONE? Ladies, don’t do that. Realize they are different.)

As we talked – well, my girlfriend and I talked and the boys made agreeing noises – at least we took them as agreement sounds – we realized how right they were. And these men have certainly set the example of hanging on.

They have been there through the difficult times of life and marriage. If this blog wasn’t already long, I would tell you about the difficult things they have weathered with us in our marriage. You name it – no matter how difficult (except for abuse) – and we have probably had our marriages touched by it. And they have been ROCKS! Amazingly dedicated, committed, unflappable ROCKS! They have hung on to the (bad word) rope.

Do you have a marriage tip? What is your best advice for a couple?

You might also enjoy: Wedding Fiasco or Failing My Marriage Vows?