It’s here!  You can purchase my book, Pushing to the Peak, from WestbowPress here or on Amazon here or Barnes and Noble here. 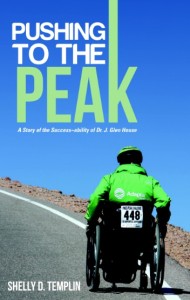 January 5, 1990 was a day like any other. Until I got the phone call. The phone call that said that my younger brother, Glen, had a skiing accident and was paralyzed from the neck down, probably had a brain injury and may not survive the life-flight trip to the hospital. And if he did survive, he would be a quadriplegic.

I prayed at that moment that God would not let Glen live if he was going to be a quadriplegic. I could not imagine my brother content to live his life confined to a wheelchair. God did not answer my prayer and I am grateful. Glen did survive the flight. Though the accident left him paralyzed, he never pitied himself, was angry or wavered in his faith. Instead, he pushed forward – with often nothing but sheer determination to sustain and motivate him.

He went on to graduate from college with honors, became a doctor, inventor, businessman, entrepreneur, husband and father who now daily touches the lives of others that face physical difficulties. This is his story. This is not a story of his disability; this is a story of Glen’s success-ability.

Check out this video

And this video Pikes Peak 5 video