I heard a guy talking about how his 40-something-year-old wife didn’t know who Bing Crosby was. When he mentioned Bing, she immediately thought of Chandler Bing from the popular 90’s show, Friends.

This same guy’s 12-year-old son is an avid sports fan so during the “parenting process,” the dad used what he thought was an excellent sports analogy evoking the unparalleled success and popularity of Michael Jordan. The dad was so proud of his ability to give an example his child would latch on to and respond to – which would, of course, cause him to change his behavior. When the dad finished speaking, he asked the son if he had any questions.

“Yes,” the son replied, “who is Michael Jordan?”

Who is Michael Jordan? Who is Bing Crosby? 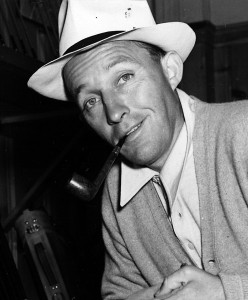 The man speaking asked for a show of hands of who in the room thought of Chandler Bing when he said “Bing.” I looked down the row of chairs and my daughters did not have their hands raised. My husband and I smiled. We had taught them well. Our young, adult daughters were very familiar with Bing Crosby.

My daughters’ were serenaded at night by their father’s lullaby of Bing’s famous song from White Christmas.

If you’re worried and you can’t sleep

Just count your blessings instead of sheep

We tuned our satellite radio in the car to “The Best of Bing” and sang along with the smooth crooner. Bing filled our home with carols at Christmastime. They knew Bing. Bing Crosby.

They knew Bing because my husband taught them about Bing. And his father taught him about Bing.

But a lot of people only know Bing as a character on a fictitious show about a group of friends. And little boys growing up only know Michael Jordan as an underwear model.

The greatness of Bing and Jordan – all but forgotten in one generation.

It is a lot like that with our faith. If I don’t teach my children about the faithfulness and grace of Jesus, who will? If I don’t combat the voice of the world with the voice of Truth, how will they know?

All four of my grandparents were people of faith and lived their lives according to the Bible. All of them lived by the two “greatest commandments.” They loved the Lord their God with all their heart, soul and mind and their neighbors as themselves.

My husband and I have taught our children to love the Lord their God with all their heart, soul and mind and their neighbors as themselves.

Faith passed down. Faith in a loving Father who is faithful to them. A faith that teaches love.

But what if we didn’t? What if in one generation, faith was erased from my family line?

In the Bible, King David was “a man after God’s own heart” and his son started out to follow in his father’s faith footsteps. But then he put his faith on the “back burner.” His son and grandson lived lives completely void of a belief in the God that had helped him slay a giant and lead a nation. They turned to idols and pagan gods. In two short generations, the people had forgotten what the Lord God had spoken.

No wonder they were a Godless people. No one told them.

How much easier life would have been for the young king, Josiah, if someone had told him.

I’m grateful for grandparents and parents that have not only told me about God’s faithfulness and his ways but also showed me how to love the Lord the God with all my heart, soul and mind and my neighbors as myself.

Where there is no vision, the people are unrestrained,

I’m glad my kids know who Bing Crosby is, but more importantly, I am grateful they know who Jesus is and are dedicated to sharing His love.

This world surely needs it.

What do you think? Did someone teach you? Are you teaching others?