A few weeks ago when my husband and I were traveling to a different state for a college football game, we were touring the town’s quaint square filled with shops and restaurants. Even though it was only October, when my daughter spotted a “unique” Santa figurine that looked like it needed to be added to my collection, I bought it.

The salesgirl wrapped it up (and I use that term “wrapped” very loosely) and she put it on the bottom of the bag. I had wondered off during the bagging of the Santa and had no idea that it was at the bottom of the bag, so the next day when I slung the bag of “clothes” into the truck, I heard a thump.

I later found out that the thump was Santa’s boots breaking off.

When we returned home and unpacked, I left Santa and his boots lying on the kitchen counter since I knew I had several weeks to deal with my crippled St. Nick. It wasn’t urgent.

I left the house to run some errands and when I returned, I saw a bottle of Super Glue lying next to Santa and one of his boots was attached. My husband, bless his heart, knows I love my little Santa’s so he sweetly tried to glue Santa back together. I was grateful that Husband was trying to help me out so I gratefully let him tackle the project. Later that night, the other boot was attached.

But there was bad news. Santa could no longer stand up!

“Didn’t you glue the boots back on just like they were before?” I asked. 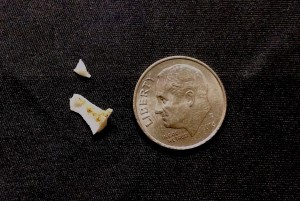 “I thought I did. But then I found these two little pieces. I didn’t think they would make that much of a difference because they were so small – but I guess they do. Maybe we can glue some felt onto Santa’s heels.” Husband replied.

“Well, we have some time to figure it out.” And Santa was tucked away in a supine position until after Thanksgiving.

I can relate. Can you?

A little bit of our life is broken and we fear we can no longer stand. Even when we try to patch up the broken parts, there is often something left out, missing, that makes us unstable.

Maybe it’s the death of a loved one. A missing piece.

Maybe it’s an abuse that was committed against you that took a piece of your innocence.

Maybe it’s words that were spoken about you or over you that caused a piece of your confidence or self worth to fall away.

Maybe it’s a decision that you made that cost you a piece of your integrity.

Missing pieces. Itty-bitty missing pieces that make us think we will never be able to stand again. And maybe we can’t. Not on our own.

But the good news is that there is a Heavenly Father that makes all things new. He can turn our sorrow into dancing. He can give us joy and hope in our despair. He can strip off our grave clothes so that we can be truly free.

Then He who sat on the throne said, “Behold, I make all things new.”

And He said to me, “Write, for these words are true and faithful.”

Do not sorrow, for the joy of the Lord is your strength.

You have turned my mourning into joyful dancing.

Jesus called in a loud voice, “Lazarus, come out!” The dead man came out,

his hands and feet wrapped with strips of linen, and a cloth around his face.

Jesus said to them, “Take off the grave clothes and let him go.”

Whatever piece you are missing, know that Jesus heals our physical, emotional and spiritual wounds so that we can stand. And stand strong.

I will declare that your love stands firm forever,

that you have established your faithfulness in heaven itself.

This site uses Akismet to reduce spam. Learn how your comment data is processed.