Last week Houston, Texas flooded. Again. Highways were shut down and people were stranded. I watched the news reports and remembered another time Houston flooded…

A ringing phone awakened me early one Saturday morning. I rolled over and answered in a sleepy fog.

“Is this Shelly?” a voice with an accent asked me.

“Yes,” I replied with a bit of a question in my voice because I did not recognize the voice.

“Do you know Marilyn? Or Margaret? No, that’s not right. Mad…”

“Yes! Yes! Madelyn. She gave me your number and told me to tell you that she and the kids are safe. They are dry and they are safe.”

“What? Where are you? What are you talking about?” I questioned – still half asleep.

“I’m at the gas station on Will Clayton. I gotta go. Lots of people are waiting to use this phone.” Click.

I hung up the phone and lay back down. My husband asked what the call was about.

I had talked to Madelyn the night before and she told me she and the kids were on their way to the airport to pick up her husband. Something was nagging at me so I got up and turned on the TV. The news was showing massive flooding in Houston.

I walked back into the bedroom and told my husband that I thought Madelyn and the kids might be stranded in the flood and I thought I should go after her.

“You don’t even know where she is,” my husband responded with reason.

“ I know, but I know she is close to the gas station on Will Clayton. I will start there and just ask around. Maybe the lady that called me is there.”

I pulled on some shorts and my Teva’s.

“Promise me you won’t drive into any high water!” 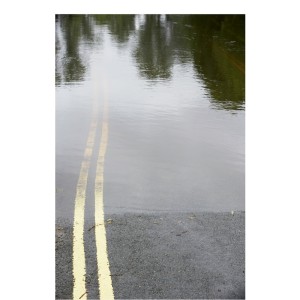 When I got close to the gas station on Will Clayton, the water was over the road. I promised my husband I wouldn’t drive into water but I never said I wouldn’t walk in water. I know. I know. You’re probably thinking he didn’t say it because he never thought he would need to. He assumed I would know better than that.

But I needed to get to the gas station. So I rummaged around in the back of the suburban and found one of my daughter’s tiny backpack purses. It was just big enough to hold my phone, my car keys and my wallet. I loosened the straps as much as possible, positioned it on my back, grabbed my coffee cup (don’t ask me why) and started walking. Most of the way to the gas station the water was only about knee deep. Not too bad.

When I got to the gas station, I asked around if anyone knew anything about my friend, Madelyn. Nope. The gas station store was full of people that had been stranded and tired and hungry and needed a bathroom.

What now? There wasn’t any sign of my friend. I walked to the curb and looked down the long, flooded boulevard. I could see lots of cars stranded – some of them in water up to their roofs. It scared me to think my friend was stranded with her kids somewhere down that road.

So I started walking – still with my coffee cup. The water got deeper and deeper. I was waist deep when I saw a piece of wood float by with a kazillion fire ants mounded on it. Yikes! I let it pass.

Then I stepped on something that felt like a dead, soggy rat or cat or squirrel. I screamed. I jumped. I tried to run but the waist deep water held me back. I thought about turning around about the time the water got shallower. I kept going.

An 18-wheeler was coming towards me. I flagged them down.

“Where did you come from? Did you go all the way down the road?” I yelled over the diesel engine.

“Yeah, I had to go rescue my girl,” the driver replied.

“I’m looking for my friend Madelyn and her two kids. Did you by chance see a mom and two kids?”

“Who? Who ya looking for?” the passenger yelled back at me.

“Madelyn! Madelyn!” I yelled, trying to be heard over the truck’s engine.

All of a sudden I heard someone yell my name. SHELLY! SHELLY, I’M OVER HERE!

The driver looked out his window and told me there was a gal flapping her arms on the other side of the road. I ran around the truck and saw my friend down the road waving and crying and laughing.

I had not seen her car because she had tucked it behind a building on the highest ground she could find. She explained that the water came up fast and she couldn’t escape. They had stayed in the car all night – and let a complete stranger take refuge with her. They were covered with mosquito bites and her young daughter had used her last diaper a long time ago.

I was a pretty pitiful rescue team. I had a cold cup of coffee in my hand and a car in the distance. The stranger put the toddler on his shoulders – soggy diaper and all. We grabbed a swim noodle out of the back of her car for the young boy and we walked through the water back to my car.

“I can’t believe you came for me,” Madelyn kept saying.

But the dearest of friends is Jesus. He will never leave you or forsake you. He will rescue you – or walk through the water with you. He will guide you and love you and teach you. He will listen to you – even when you are angry with him. He will speak to you – when you take time to listen to him. Jesus is the best friend. He laid down his life for you. For me.

Do not be afraid or discouraged,

for the Lord will personally go ahead of you.

He will be with you; he will neither fail you nor abandon you.

Jesus said: I no longer call you slaves,

because a master doesn’t confide in his slaves.

Now you are my friends, since I have told you

everything the Father told me. John 15:15

Is Jesus your friend? Do you want him to be? Comment and let me know.