The train voice came on and said, “Please exit the train. This is the end of the line.”

He thought, “What if I don’t get off? What will happen? I wonder where this train goes at night.”

And then his actions followed his thoughts. He stayed on the train. Alone. At 1am.

The doors closed and the train started to move. The train didn’t back up. It went forward. Into a pitch-dark cavern and stopped.

He was on a motionless train in a cave in complete darkness in the middle of the night with less than 2% battery on his cell phone and no cell service.

“Oops, maybe I should’ve gotten off the train,” he thought as he contemplated spending the next several hours underground alone.

Oh, “he” is my brother, Glen. Yes, my brother that is a very smart doctor and businessman – and a quadriplegic.

The idea of spending the night on a train in a dark tunnel, without a phone to let people know where we are so we can be rescued or even provide light, would be horrifying for any of us. But for my brother, as a quadriplegic, other factors made the situation complicated.

Glen couldn’t just stretch out on the floor, using his backpack for a pillow, and wait until morning. If he lay on the hard train floor, he ran the risk of getting a pressure sore – not to mention the difficulty of getting in and out of his chair. If he tried to sleep in his chair, he ran the risk of falling out. If he spent the entire night in his chair, he legs would swell and that could cause health issues.

Glen knew he was in a pickle. “Why in the world did I think it was a good idea to stay on the train when I was told to get off?” he thought.

Why do any of us disobey? Why do we push the limits of what is right and wrong? Why can’t we just follow the directions?

The Lord laid out a clear path for us in his Word – a path that leads us to live a hope-filled, joy-filled life. He sets guardrails and signposts along the path to help us.

I know, I know! You think His ways are too restrictive. You think God is a killjoy. 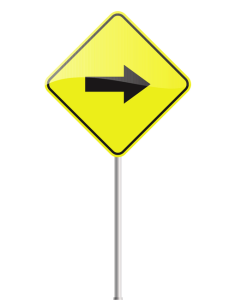 Why can’t I be married to an unbeliever? Unbelievers are decent people too. We have everything else in common. And he’s open to God – someday.

Why can’t I have sex outside of marriage? We love each other and will someday get married. God wants me to be happy, right? That’s so old-fashioned.

Who is God to dictate how I dress? Modesty is an ever-changing concept.

What’s wrong with watching that movie/listening to that music/reading that book? It’s harmless and just entertainment.

And on and on it goes. I’ve heard all of these and many more. I’ve also comforted people when they are struggling to deal with the consequences of their disobedience to God’s Word. The stories could fill a book – a very sad book.

The path God sets before us – with guardrails and signposts – is for our good, not for our harm.  The path is there to help keep us out of a dark tunnel where we are alone and frightened.

I will never forget Your precepts, for by them You have given me life. Psalm 119:93

What was learned in the dark tunnel? It’s usually best to listen to the voice and obey.

Are you wondering what happened to my brother? After about twenty minutes, the train came to life. The lights came on and started to move. When the train got to the first stop, you can bet Glen got off the train – FAST! And he’s never been tempted to do that again.

Have you ever stayed on the train? Have you ended up in a dark tunnel of despair – void of hope? If so, how did you get out? If you are there now, there is hope! You won’t be there forever.