When I first married, I started a Santa collection. It didn’t take me long to figure out that there wasn’t a lot of variety when it came to Santas. They were all pretty much wearing red suits trimmed in white fur, were fat with a long beard and twinkling eyes. So I switched my collecting efforts to snowmen – and snowwomen and snow boys and snow girls.

Each year when the time comes to pack away the Christmas decorations, these carefully selected snowmen pose a bit of a challenge. The Santas are easy – I just have to alternate their plump bodies in the box. Even though the snowmen come in all shapes and sizes that is not what challenges my packing skills. It’s their noses. All of the snowmen have one thing in common – carrot noses that stick out. 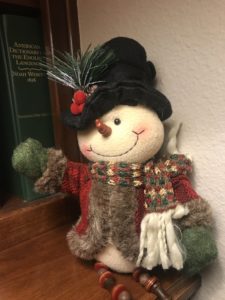 As I carefully pack away the snowmen, I have to arrange them so as not to smash any of their noses. What a pity it would be if next December when I opened the “snowman” box, none of them had noses.

Last year as I was arranging and rearranging the snowmen and their noses, I thought to myself (or maybe I mumbled it), “We wouldn’t want any of you to get your noses bent out of shape.”

Noses bent out of shape. Webster defines this term as “getting upset, agitated or angry.”

I thought about all of the noses in our family that get bent out of shape for one reason or another during the celebratory Christmas season. We are often working so hard to do things for our family we often forget to consider them.

I know I am guilty of getting so busy with decorating

that I often get agitated and upset.

My nose gets bent out of shape.

But this year, as I look at the snowmen around my house, they are more than just cute figures. They have a new meaning. They are a reminder for me. A reminder not to let my nose get bent out of shape.

My snowmen can remind me of the true meaning of this season – the birth of our Lord, Jesus.

And there were shepherds living out in the fields nearby, keeping watch over their flocks at night. An angel of the Lord appeared to them, and the glory of the Lord shone around them, and they were terrified. But the angel said to them, “Do not be afraid. I bring you good news that will cause great joy for all the people. Today in the town of David a Savior has been born to you; he is the Messiah, the Lord. This will be a sign to you: You will find a baby wrapped in cloths and lying in a manger.” Suddenly a great company of the heavenly host appeared with the angel, praising God and saying,

“Glory to God in the highest heaven, and on earth peace to those on whom his favor rests.”  Luke 2:8-14

Tell me.  Does your nose ever get bent out of shape?

This site uses Akismet to reduce spam. Learn how your comment data is processed.