Pio came into my family’s life when he befriended my brother while they were in medical school. He grew up in the Philippines but came to America to go to medical school and since his family was so far away, our family took him in as one of our own – including him in our family celebrations and holidays.

Before I tell you a story about Pio, I need to let you know that everyone was okay. So feel free to chuckle as you envision the scene… 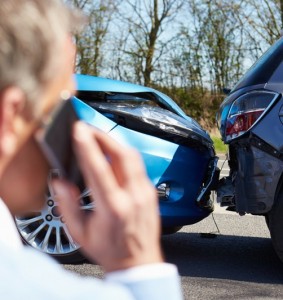 Pio was driving his car down a highway and saw a car cross the median and head straight for the car in front of him.  He knew there was going to be a head on collision and there was not enough time to miss being a part of it by braking so he yanked the wheel to the right – which sent his car veering into a ditch along the road.  It was difficult to handle the car and he sort of panicked and instinctively yanked the wheel back to the left – sending him right back into the middle of the collision.

By the time he was back on the highway, both cars had already collided but continued on their paths. Pio steered his car right between the two vehicles, off the other side of the highway – and into the median.   As he was bumping along, trying to bring his car to a halt, he watched his glasses fly off his face and into the air – almost as if in slow motion.

Since Pio is like Mr. Magoo without his glasses, as soon as they were a few inches away from his face, he lost sight of them.  About the time he lost track of which way his glasses flew he snapped back into real time and the car came to a halt.

Pio quickly began to look (or should I say feel) around for his glasses. All of a sudden he stopped and thought, “Hey, I’m a doctor and those other people may need my help.”

At that moment, there was a tap on his window. When he turned toward his door he made out the outline of a large man.

“Are you okay?” the man asked.

“I think so,” Pio replied as the man opened his car door.  “I am a doctor.  I should check on the people in the other cars.”

The man began to help Pio out of his car.  As he did, Pio confessed, “My glasses came off in the wreck and I can’t find them.  Can you lead me to the cars?”

“Sure,” replied the big man, and he took Pio by the arm and lead him to the first car.

(If you are like me, I bet you are wondering why the man did not stop to look for the glasses in the car instead of leading a half blind doctor to tend to possibly critically injured patients.  But he didn’t  ~ and they trudged out of the median and onto the highway.)

Pio was guided to the first car.  The traffic had stopped and a small crowd had gathered.  I wish I could have seen the look on their faces when Pio announced that he was a doctor.  The near blind man that had to be lead to an object as big as a car was going to assess injuries? I guess a Mr. Magoo sighted doctor is better than no doctor!

Since Pio couldn’t see very well but he still wanted to be thorough, he asked those that had gathered around to check certain things for him – like, “is there any blood?”

Feel free to laugh now!  What a crazy scene.

After Pio assessed the condition of the person in the first car and determined they would be okay until an ambulance arrived, the big man, a trucker, again took Pio by the arm and guided him to the next car.  This time the trucker announced, “I have a doctor here.”

Pio assessed the second patient – again with the help of those gathered around. Once the ambulances started to arrive, the trucker lead Pio back to his car and located his glasses – in the back seat.  Pio was grateful to have is eyesight back even though his glasses were bent and sat catawampus on his face.

No doubt, that was an interesting accident report write-up.

My Filipino friend had wrecked his car trying not to wreck his car (and the insurance company wouldn’t consider Pio’s wrecked car part of the accident because he didn’t touch either car and they claimed he caused his own damage.)

But what really struck me was that as he sat there somewhat dazed and definitely without his eyesight, he had the presence of mind to think, “I am a doctor and I need to help those people.”  And without stopping to think of his own best interests – finding his glasses and assessing his own injuries – he went to help others.

How many of us are having a bad day and we don’t stop to think of whether there are others in our lives that might be having a worse day?

Or how many times do we get so caught up in doing what we think we “have” to do that we forget to tend to the really important things in life?

Or do we sit in self-pity and wait for others to notice?

Yes, Pio wrecked his car. But others had wrecked theirs worse. Yes, he needed to find his glasses. But others might have needed Pio to find their pulse. Yes, Pio could have sat in his car and pitied the shape he and his car were in. But even before the tap on his car window, he was thinking of reaching out to help others.

We need more people like Pio in this world. Will you be one?

Greater love has no one than this: to lay down one’s life for one’s friend. John 15:13