It seems like most parents have categories for each of their children. You often hear them refer to their kids as the clumsy child, the athletic child, the child with allergies, or the smart one. When my girls were little and a group of mothers would get together, you would often hear someone refer to a child as “a climber,” “a good sleeper,” “a good eater” or “a picky eater.” I have been guilty of referring to one of my daughters as “the one who throws up a lot.” And I usually have a mom in the group that tells me which of her children fits that bill. Categories.

We often give our kids labels that reflect character flaws or character strength. My youngest daughter has been labeled our destructive child. She is a conscientious and clever child and doesn’t look like an oaf but she breaks things as if she were twice her size and twice as strong. She doesn’t just break things. She spills things. Tears things. Tangles things. Scratches things. Stains things. She just flat out tends to destroy or damage things. The last time we bought bedding for her room, I pushed for the dark brown comforter.  At least that hides the red ink spot that is already there.

We call this child our “destructo baby” even though she is now almost a teenager. When family and friends gathered to celebrate Thanksgiving, I wasn’t surprised that it was my child that had the accident while ALL of the kids (mostly boys) were riding go-carts. A leg cast became her new fashion wear. 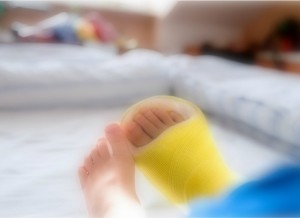 She seemed to manage with the cast just fine and the kids at school liked helping her carry her books from class to class. Then came the call from the school nurse’s office.

“Mom, I need you to come up to the nurse’s office at school. I got the lid to my pen stuck down in my cast and I need you to get it out,” my ten year old said.

“Where is the nurse?” I asked.

“She tried to get it out but it is too far down there. I need you to come get it out.”

“Okay. I’ll be right there.” I tried to keep the frustration out of my voice.

“Thanks,” came the embarrassed reply.

It wasn’t until after I hung up the phone that it dawned on me that I was a little perturbed that the nurse expected me to be an expert pen cap retriever. And why didn’t she apprise me of the situation?

My thoughts didn’t linger there long because the next thought that popped into my brain was, “What in the world does one use to extract a pen cap from a leg cast.”

She said it was, “way down there” so I knew I needed something long, skinny and strong. When I wore my cast thirty-four years earlier, we were warned not to stick anything down our casts to scratch – especially a coat hanger.  (My broken foot bones were not my fault – lest you think my daughter takes after me in that regard.  My brother challenged me to let him pull me on my skateboard while he rode his bike.  Darn the little rocks that stopped my skateboard – but not my body…)

I stood in my kitchen and thought. And thought. And thought. Then I began to walk around my kitchen opening drawers and cabinets. When I got to the drawer with the metal meat skewers, I nearly shouted, “I’ve got it!” Instead, I grabbed two of the longest and strongest skewers and called to my husband who was working in his home office, “Honey, I have to go to the school to get a pen cap our of Tara’s cast. I shouldn’t be long.” 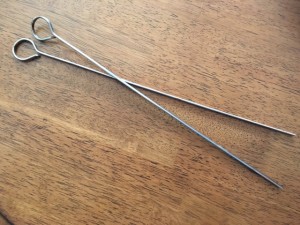 “Okay, see you then,” he called back as if I had just said something as normal as “Honey, I am running to the store to get more milk.”

I got to the school, walked right in the main doors, down the hallway, and into the nurse’s office with my metal meat skewers. I expected to be tackled to the floor and have the grilling utensils wrestled out of my grip.

Surprisingly, no one seemed concerned. Please tell me I am the first mother that has had to perform this procedure and that they weren’t just used to it! (Now everyone that enters the school doors has to show a driver’s license. Could that be my fault?)

When I entered the nurse’s office, I found my daughter sitting on one of the beds – looking a bit guilty. The nurse was in her office. I smiled, held up my meat skewers for her to see and announced that I was there to retrieve the pen cap.

“That’s fine,” she said and then went back to doing whatever she was doing at her desk.

“Odd,” I thought but didn’t dwell on it because my daughter’s predicament captured my attention. “Show me where the cap is,” I said as I prepared for the extraction.

My daughter pointed to her ankle! Thank goodness I brought the extra long skewers.

I stuck the rounded handle end into the cast and fished around until I felt something other than an anklebone. Though I located the cap fairly quickly, I wasn’t able to coax it up her leg. Maybe two skewers would help. Nope.

My daughter was becoming anxious. Was it the prospect of living three weeks with a cap wedged in her cast or the embarrassment of her mom brandishing. Then an idea flashed.

“Lie on your back and put your leg in the air”

“What?” my daughter asked.

“Let’s try it. I think it will work,” I reassured her.

After a few tries and some fancy maneuvering, the cap started to move. Once we got it to move, it wasn’t long until the cap came out the top of her inverted cast! I handed the cap to her and jokingly threatened that if that happened again, she might just have to live with a cap in her cast.  Then I gathered my meat skewers and left the building as my daughter hobbled back to class – with a grand story to tell.

I drove away from the school satisfied – though I couldn’t revel in my success long because next I had to think about the dinner menu. As I thought about what I could cook, I glanced over at the meat skewers in my front seat. Shish-kabobs. That’s what we will have.

Proverbs 31:27 says that the virtuous women “watches over the

affairs of her household and does not eat the bread of idleness.

I wonder if the Biblical virtuous women ever had to stop her duties to retrieve a pen cap from a leg cast with meat skewers.

Do you ever have those days when you feel like you are spinning your wheels either at work outside the home or within?  When you think that you aren’t making much of a difference in this world?

Sometimes, it’s the little things like retrieving a pen cap with meat skewers, or wiping peanut butter off of a little face, or caring for an ailing parent, or giving a co-worker a smile and a word of encouragement that makes the difference in someone’s life.  Sometimes it’s doing something small for someone that keeps us from eating the bread of idleness.