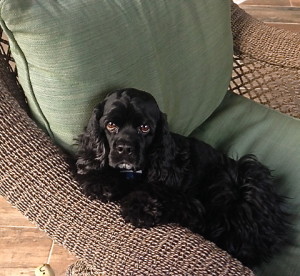 My oldest daughter did what every college student wants to do as soon as they move out of their parent’s home. She went to the mall and bought a genetically inferior puppy she could not afford nor had the time to care for.

Then she did what all of those parents that have gone before us warned us she would do – she brought the dog home to us because she could not afford it nor had the time to care for it. In our daughter’s case, it was only going to be for a month while she traveled the world.  Well, her month turned into a year.

At that point, the genetically inferior (GI for short) puppy became “ours.” Our other non-GI puppy and youngest daughter could not live without the GI puppy. So he is here to stay. In fact, as I type this, he is sharing the chair with me.

Even though (or maybe because) he is GI, he is a sweet thing.  Sweet, but not so bright. One of the downfalls of starting out his first few weeks living with a teen who was not home much and when she was she just wanted to sleep, is that he seems confused by the whole going outside to do his “business.” Sometimes he does. And sometimes he doesn’t. My youngest has tried to convince me that it shows how smart he is that he can go wherever he wants and someone will pick up after him.  (You probably can guess that my youngest doesn’t do much of the doodoo picking up.)

One day I was gone most of the day ~ but the teens had been home. I was busy running around getting caught up with household chores when I found a little “pile” on the floor – near the dog door.  For some reason, one of the kids had locked the dog door that day. I couldn’t really be upset about that.

At least the dog had tried.

A few minutes later, my husband came home with groceries.  As he unloaded the groceries and started to put them away he said, “It smells like dog mess in here.”

“Really?  One of the dogs made a mess by the door but I cleaned it up and I don’t smell anything,” I replied and went back to what I was doing.

My husband joined me a few minutes later in the living room.  After visiting for a few minutes, he again said, “It really smells like dog mess.”

Again, I replied, “I don’t smell anything.”

He leaned over, took off his shoe, turned it over, smelled it and said, “I have dog mess on my shoe!”

I turned my head back towards the kitchen and, sure enough, there was a trail of dog mess leading right up to my husband.  He had walked in, stepped in the “mess.” smelled the “mess” but never looked down to see if there was “mess!” Therefore, he had tracked “mess” ALL over the kitchen.

Not the way we wanted to end our day!

I asked him why he didn’t look down when he smelled the “mess.” He didn’t know. He just kept going about doing what he was doing.

Sometimes we do that in life. We stomp around in the mess and never stop to see where the smell is coming from. We just keep trudging along. All the while, making a bigger mess. And we complain about the smell.

Maybe it is a job that is our mess. Or an unhealthy relationship. Or a living situation. Or an attitude. Or fear. Or insecurities. And the list goes on.

We don’t stop, look down and see what is making that smell. Often, we just keep stomping through it and complaining about the smell. When what we need to do is stop and clean it up.

It was not pleasant to clean up the mess but it would have been a whole lot easier to do before it was tracked all over the kitchen floor and into the living room!

Maybe we need to look for another job.  Or end an unhealthy relationship (and if you don’t know if your relationship is unhealthy, ask those closest to you. And I’m not talking about ending a marriage.  If the marriage smells, seek counsel.) Or move. Or adjust our attitude. Or face our fears.  Or trust the Lord with our insecurities.

I know changes are not as easy to make as cleaning my floors, but changes can be made. And it is always better to stop, figure out where the smell is coming from and clean it up before we make a bigger mess!

“I can do all things through Christ who strengthens me.” Phil 4:13

“In his heart a man plans his course, but the Lord determines his steps.” Prov. 16:9