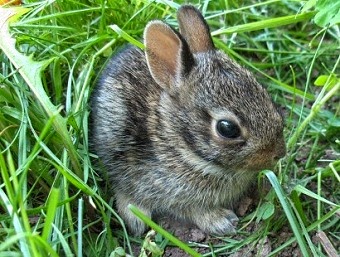 A few years ago, my girls were visiting an aunt during Spring Break and I had a few glorious days at home – all alone. I decided to use the time to organize closets and cabinets and create an uber organized sewing center.I was working hard to finish up one night when I realized that our dog, Jessie, had been roaming in the woods for some time. When I went out to call her and yelled “treat,” she came running out of the woods and up the hill. She hesitated when she got to the door. I could see she had something in her mouth and thought it was a bone. As she got closer, I realized two bunny feet were sticking out of the side of her mouth!

I commanded her to “DROP THE BUNNY!” Nothing. Then I tried the common hunting vernacular, “give.”  Since Jessie only hunted what was on the coffee table or lower shelf of the pantry, she just stood there looking at me ~ with bunny feet sticking out of her mouth like a cigar. She had no idea what the “give” command meant.

I could see the bunny was still breathing when I lifted Jessie’s “lip,” so I went into full bunny rescue mode.

In case you don’t know what bunny rescue mode is, let me explain what my version of it looked like.

When I came back to the garage, Jessie had dropped the bunny so I grabbed her – and the bunny took a hop. It was still alive!

I called the A&M veterinary school but it sounded like the bunny would be a science project if I took it there. So, I made a little nest for the bunny with a small towel and took it back to the edge of the woods and left it. I was hoping that once the bunny’s shock of being in a dog’s mouth and having a lunatic women screaming, “drop the bunny!” for a solid twenty minutes he would simply hop back to his mama.

After finishing my sewing center project, back out I went to check on the bunny.  It was still there but had turned around in the towel/nest. I heard a lot of rustling in the woods a few feet away so I scrambled back inside for a brighter light – and better footwear.

I had a fractured heel and was in a boot cast so I covered my cast in a trash bag and traded the flip-flop on the good foot for a rubber boot. When I got back to the bunny, I scooped it up and headed into the woods in the direction of the noise – thinking it was the mama bunny. Only there wasn’t any noise. All was quiet. I still pressed on  – hoping that I wouldn’t encounter a skunk.

I hope you can appreciate the picture here – I am trudging through the woods holding a traumatized baby bunny, I have a trash bag wrapped around my cast, it is after 10:00pm and no one except for the bunny knows where I am.

I found another baby bunny so I set “mine” down next to it (still in the towel/nest) with great hopes that the mama would come get her baby bunnies and take them back to safety.

I looked up from the two bunnies towards the woods to see if maybe the mama was coming to get them.  What I saw instead were a lot of glowing eyes! I did not stay around long enough to figure out what kind of animal the eyes belonged to because there were a lot of eyes. I was trusting that they were a lot of bunny eyes and the bunnies were waiting to welcome the baby bunny back home. But what if they were the eyes of the coyotes I had heard earlier?

But I saved the baby bunny.

Or so I thought.

When I went to check on the baby bunny the next day when the sun was bright and the eyes weren’t glowing, the towel nest was empty! I was so relieved to know that the baby bunny hadn’t died where I left it. Successful bunny rescue!

Until I turned around and saw a headless baby bunny! Maybe it wasn’t the bunny family welcoming the bunny home.

I had the best of intentions to save the bunny but I may have just served it up on a platter, uh, I mean a towel/nest.

I think of other times that I have had the best of intentions and they did not go as planned.

My list of “best intentions” is long and runs the gamut from trying to give food to a homeless person that growled at me to flawed parenting tactics. Best of intentions.

All things work together for good for them that

are called according to His purpose!” Romans 8:28

Not sure how that verse relates to a bunny death ~ but it is a good reminder about other difficulties in our lives.

Have you ever had good intentions that went awry? Comment and tell me about them.