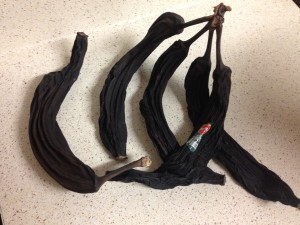 I cleaned my daughter’s apartment when she was moving out after her first year at school and I found black, dried up bananas on the top of her fridge. I didn’t immediately recognize the fruit. The sticker on the stick-like, black mass helped solve the mystery.

I asked my daughter if she smelled the onions or bananas when they were rotting.

“Yeah, I think I smelled something but I didn’t know those were even up there. My roommate bought them.”

“The roommate that moved out 7 months ago? Those have been up there for more than 7 months??”

“I guess so,” was her reply – accompanied by a shoulder shrug.

Before I tossed the bag of onion skins and the petrified bunch of bananas in the trash, I grabbed my phone and snapped a picture.

My daughter watched me and asked, “You’re going to write about this, aren’t you?”

“I guess that’s fair,” and off she want to vacuum up the dried up contacts on the floor next to her bed – but that’s another story. (And I’ve learned it’s not limited to just my child.)

Back to my rotten fruit and veggie story…

The bananas and onions ripened and then rotted a few inches away from where the girls ate, lived and slept but they did not notice it. They noticed something didn’t smell right but they didn’t know what it was and didn’t take the time to figure it out.

Are you thinking, “Gross, I would never do that?”

I thought it. I wouldn’t do it with onions and bananas but I realize I do it with other things in life.

There are things in my life I ignore. There is often a stench I don’t want to take the time to figure out where it is coming from or even what it is.

When there is a wound and we ignore it, the wound can get infected and, left untreated, the wound will fester and the infection will worsen.

Have you ever gotten a whiff of an infected wound? If not, thank the good Lord.

Some sort of bug bit another one of my daughters and the infection went into her belly. The infection we could see looked like a big pimple but when the doctor cleaned it out, the infection was deep. Very deep. We were told we would have to leave the wound open so it could heal from the inside out and were instructed to put the medicine in the hole and then fill it with gauze strips. I thought the hole needed a stitch or two – or three!

When I pulled out the gauze the doctor packed in the wound in the ER, a strip about eight inches long came out!

My husband used tweezers to hold the hole open and I stuffed the gauze into the cavity. My daughter screamed in pain and it took every thing I had in me not to throw up. I could not believe the wound was so deep and that we had to leave it open! I’m pretty sure I only got about three inches of gauze into the wound.

We have things in our lives that stink but we ignore them and end up with a deep, infected wound. The world tells us to cover it up, ignore it and just move on.

But what we really need to do is get the infection out – no matter how deep it goes. Then we have to do the painful thing – let the wound heal from the inside out.

Just like with my daughter, sometimes the method to heal is painful. We don’t want to let go of anger, bitterness, jealousy, an offense or other pain from our past. But if we don’t, those things will fester and infect our lives.

Thankfully, the Lord is the master healer. He heals our physical and emotional wounds. It may be a painful process and we may end up with a tiny scar. A scar that reminds us of the day the healing was complete.

Get rid of all bitterness, rage and anger, brawling and slander,

along with every form of malice. Ephesians 4:31

Bear with each other and forgive one another

if any of you has a grievance against someone.

Forgive as the Lord forgave you. Colossians 3:13

Create in me a pure heart, O God, and renew

a steadfast spirit within me. Psalm 51:10

Do you have something in your life that really stinks that you are ignoring? Is there something rotting near you – or in you?