A few days ago I went for a bike ride. Because of my diagnosis, my family and friends worry about me when I ride. I question whether I should be riding since I am due to have a procedure on my knee soon. Why not just wait until I recover?

I was pedaling along thinking, “Why am I even doing this? In a few weeks I will have a procedure that will make it impossible to ride for weeks – maybe months. What’s the use?”

And then I looked over and saw a couple walking a dog. The dog was kind of hopping so I looked again and realized the dog only had three legs.

My first thought was how cruel it was to make the dog go for a walk with only three legs. Shouldn’t he be allowed to just lie around the house? But the dog wasn’t being drug along. He was gladly hopping down the path with the couple. He probably was enjoying the sights and sounds just like four-legged pups. 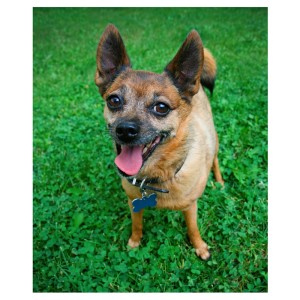 If the dog could go for a walk hopping on three legs, certainly I could continue to pedal my bike until the knee procedure.

I wrestled with whether it was a waste of time and effort to ride my bike but I continued to ride – remembering the three-legged dog.

I was a few days away from an appointment for my knee and the doubts were nagging at me but I decided to go ahead and ride.

About halfway into my ride, there was another dog – hopping along. I kid you not! Another dog in a completely different city hopping down the road. This dog had all four legs so I thought maybe he had a sticker in his paw and I was a little perturbed the owner wasn’t stopping to get the sticker out. As I got closer to the man and the dog, I saw the dog had four legs but only three paws! His fourth leg ended in a stump.

But he was on a walk. And his owner wasn’t dragging him. Both dogs probably wagged their tails when their owners grabbed their leashes. That’s what dogs do.

I smiled at God as I pedaled past the limping dog. Thankful for the gentle reminder that we don’t have to be perfect and whole to be able.

In areas of my life where I do not feel adequately equipped, I have to trust the Lord. I recently stepped into a position at my church that I do not feel qualified for but I said “yes.” I will probably stumble and make mistakes. It is in those times that I will try to remember the limping dogs.

I have friends who have lost babies but they said, “yes” to trying again.

I have friends who were molested but they said, “yes” to trusting a man and “yes” to marriage.

I have friends who have experienced the pain and rejection of divorce but have said, “yes” to love again.

My brother became a quadriplegic when he was twenty years old. He did not let the reality of being in a

wheelchair detour him from finishing college, becoming a doctor, getting married and having children. He said, “Yes.” In fact, he said, “Heck, yes!”

So often we let our limitations, our shortcomings, our backgrounds, our lack of this or our lack of that keep us from saying “Heck, yes!”

If we wait until we are completely equipped, we might be waiting a long, long time. Sometimes we have to just say “Heck, yes!”

What are you holding back from doing? Are you waiting until all of the conditions are perfect? Until you feel completely capable?

Maybe it’s time to just say “Heck, yes!” – even if you have to limp along like a three-legged dog.

The Lord directs the steps of the godly.

He delights in every detail of their lives.

Though they stumble, they will never fail,

for the Lord holds them by the hand.

God arms me with strength,

And he makes my way perfect.

Don’t forget to sign up for e-mails. I will be giving away a copy of my book, Pushing to the Peak, next week.