Every year on Valentine’s Day, I have made sure my three girls wake up to a small gift. I always have a Mylar helium balloon, a tad bit of candy and sometimes I add a gift card or other small treat. In order to accomplish this each year, I have to get the balloon late enough at night for it to be a surprise since it’s hard to hide three balloons from three curious (and sneaky) girls. Often, I have done the late night run to the grocery store – praying they aren’t sold out of balloons.

Some years, my husband would make the balloon run but only with very specific instructions from me and always at my suggestion. In the early years, I tried to get him to pick something out but a confused, almost dazed, look would cross his face. Even though my husband loves to give gifts, the thought of getting me a gift and gifts for three girls was almost paralyzing. So I took over the V-Day gift getting for our girls.

A few months ago, I heard my eldest daughter tell how her DAD always gave her a Valentine gift.

Her Dad!? Really? With his travel schedule, most years he was not even in town!
Her DAD. Always… Wow! 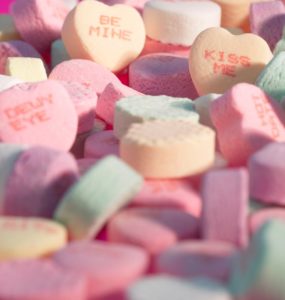 Then I settled down. The important thing is she felt loved. Loved by her Dad. That is the whole reason I made it a priority to give the girls Valentine gifts. I wanted them to know they were loved and that their Dad was their First Valentine. It was important that they didn’t think they needed a boyfriend in order to get a Valentine.

So that was successful. I should be content. And I am. But…

When my daughter first gave her Dad credit for my effort, I was offended. Shouldn’t I have gotten the credit?

The phrase, “give credit where credit is due” sounded fair to me.

Give credit where credit is due.

Do we give credit where credit is due? Two days ago, I was walking across the campus of Texas A&M (Whoop!) and I watched a student look down, stop, stoop down, pick a piece of trash up out of a flowerbed and carry it with two fingers to a nearby trashcan.

I looked around and saw that no one but me was watching this do-gooder rid the flowerbed of someone else’s trash. I tried to tell him, “thank you” – to give credit where credit is due – but he hurried off in the other direction. He did not get the credit that was due him.

I know of people who give to others anonymously. They never get the credit due them.

Many years ago, I casually mentioned in a conversation with a friend that I talked to my mother every day. We went on talking about other things and I didn’t give my comment a second thought. I moved and lost track of the woman. Recently, I ran into her and she gushed about how that comment changed her life. She started calling her mother everyday after that and it greatly enriched both her life and her mother’s life. Apparently, she gave me credit for that throughout the years. It made me feel good to know that – even though I didn’t really do anything.

Do we make a habit of giving credit where credit is due?  We should. (Maybe if we had bracelets like the old WWJD ones that were so popular 15 years ago. These could say, GCWCID. Think it would sweep the nation? Back to my thought…

A quick “thank you” – whether written or verbal goes a long way. Publicly acknowledging someone’s thoughtfulness, goodness or kindness can encourage someone more than we would ever suspect.

In the Bible, there is a story of ten men who had leprosy. They called out to Jesus to have pity on them as he passed by ~ and he healed them. One. Only one came back to thank Him. (Luke 17:11-19) Can you believe it?

Those men had a disease that caused their skin to rot off and they were
quarantined from the rest of society yet when they were healed, they didn’t think to thank the One who healed them?