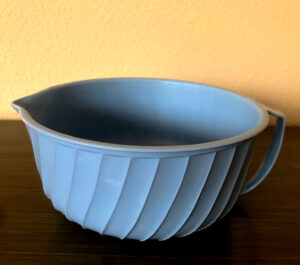 Does this look like a bowl? It is a bowl but it’s not just a bowl. It’s a reminder of young love.

When my husband and I were engaged, he was living about two hours away from me. He was just starting out in his career and I was finishing up my last semester of college. For Valentine’s Day that year, I wanted to make him a nice dinner and one of his favorite desserts – a cheesecake. I drove to his apartment and let myself in while he and his roommate were working. The neckties and dress socks draped about the living room should have been a warning – but that’s a story for another day.

When I went to the store to buy the ingredients for dinner and dessert, I knew I also needed to buy a mixing bowl and utensils because the boy had nothing! Not even a kitchen table. I am NOT exaggerating. Hubby lived in a dorm all four years of college since he was in the Corps of Cadets at Texas A&M. When he graduated, he hadn’t accumulated any housewares – or a couch. I have no excuse for his roommate.

I bought the very-popular-at-the-time-Country-Blue colored bowl and a matching set of spoons and spatulas. The utensils have long since joined the landfill but the bowl has remained. It is a great bowl with measurements on the inside. I’ll admit, we grab it before the newer ones. 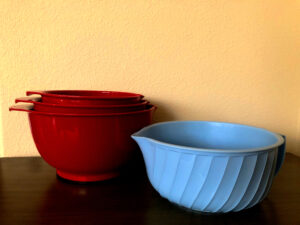 Recently, I got a nice new, set of KitchenAid red bowls and cleared out old bowls to make room. I know it is time for the blue bowl to go but I can’t bring myself to do it.

When I say the bowl is a reminder of young love, I don’t mean because of that first Valentine’s meal when we ate on a bedsheet on the floor where a table should’ve been, with the roommate flipping channels as he sat on the one piece of furniture in the apartment, stripping off his tie and throwing it towards the ceiling fan to see if he could get it to drape across the fan blades. (Again, a story for another day.)

The bowl was there during the first year of marriage when the tears flowed often as we tried to figure out how to navigate marriage. It sat on the edge of the counter the night Hubby found me crying in a heap on the kitchen floor. He rushed to me, concerned I was injured and asked me what was wrong.

“You didn’t take out the trash,” I sobbed.

I can still remember the blank look on his face. Blank. Very blank.

I had asked him to take out the trash earlier that night. Apparently, he pushed the trash further into the can and declared the can “not full” and left it there.

In my family, girls didn’t touch the trash. That was a boy’s job. It was how the men in my family took care of (or loved) the women. When he didn’t empty the trashcan, I mistook his actions as words that said, “You don’t love me.”

We talked about the trash – and the dry cleaning. Apparently, when I didn’t pick his clothes up from the cleaners in a timely fashion, he felt I didn’t care. It was a long night but we made some changes that seem so simple now but were breaking our ideas of roles in a marriage. I would take out the trash and he would be in charge of his own dry cleaning. There is give and take even with our “rules.” I can ask him to take out the trash – and have only caught him pushing the trash further into the can to avoid taking it out about 5 times in 34 years. And he can ask me to drop off or pick up his dry-cleaning.

I’m still not sure why these issues required tears and hours of discussion – but it did.

I know that seems complicated and confusing but isn’t that marriage sometimes? Taking two people with different backgrounds, upbringing, ways of doing the little things and melding them into something new?

And the Country Blue bowl has been here through it all. I have moved it out of the kitchen now but it is suspended somewhere between the kitchen and the trashcan in the garage. I’ll eventually be able to relinquish the object of young love and marriage woes but for now it sits.

The good news is there is little chance of Hubby pitching it – since trash is my duty.

So, no matter what I say, what I believe, and what I do, I’m bankrupt without love.

Love never gives up.
Love cares more for others than for self.
Love doesn’t want what it doesn’t have.
Love doesn’t strut,
Doesn’t have a swelled head,
Doesn’t force itself on others,
Isn’t always “me first,”
Doesn’t fly off the handle,
Doesn’t keep score of the sins of others,
Doesn’t revel when others grovel,
Takes pleasure in the flowering of truth,
Puts up with anything,
Trusts God always,
Always looks for the best,
Never looks back,
But keeps going to the end. 1 Corinthians 13:4-7 msg

Tell me abut your young love – you know that stupid thing that seemed like a big thing.

You might want to read these too! How to Keep Your Valentine and A Dead Cow and Young Love