This past week the world learned the famous evangelist, Billy Graham, died. My Facebook feed was full of odes to his life and legacy – mine included. Billy Graham’s life changed a generation. And that generation is changing the next generation.

But there is another story about the success of Billy Graham that is intriguing to me. The story of Ruth Bell Graham. Billy’s wife. The mother of his five children. 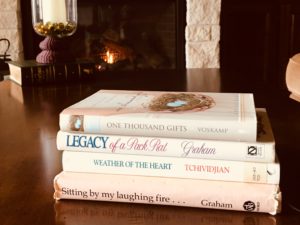 One book tucked away in a bookcase, “Rebel With A Cause – Finally comfortable being Graham” by Ruth’s son, Franklin Graham, made a distinctive impression on me. In that book, Franklin tells two stories that shaped and molded me as a mom.

The first story is about how Franklin was a rebellious teenager (a bit redundant if you ask me) who wouldn’t get up for school (been there, done that.) After days of battling with the lanky, unresponsive teen, one morning Ruth “quietly walked in my room, grabbed the overflowing ashtray by my bed, and dumped the cigarette butts and ashes all over my head.

I jumped up, madder than a hornet. I could hear her laughing as she walked down the hall.

The next night I locked my door. The following morning Mama found a little firecracker of mine in her toolbox, lit the fuse and slid it under the door. To say the least, I sprung up thinking a terrorist car bomb had gone off.

Mama wasn’t about to give up – neither was I. The next morning not only did I have the door locked, but I had wedged a wet bath towel into the crack under my door. I thought for sure I was safe from a firecracker blowing me out of bed. About that time, I heard Mama coming down the hall. I was in bed laughing to myself as I heard her jiggle the door handle and try to push something under the door. I had outfoxed her this time.

But Mama, being the resourceful women she is, persisted. All of a sudden I heard the window in my brother’s room next door squeak open. I slid out of bed and peeked out the window. Here came Mama crawling on all fours across the roof! This time she was carrying a cup of water, which she had gripped in her teeth. I stifled a laugh. She was planning to douse me. Just as she got to my window, I grinned at her and said, “Sorry!” and slammed and locked the window. There she was wondering what to do next. She reminded me of our cat with a dead mouse in its mouth, standing at the window wanting to come in.

She couldn’t help herself – she grinned, too, in spite of the cup. Because the roof had a fairly steep pitch, now she had to back up on all fours. It was a sight to behold! Suddenly, though, this wasn’t so funny. I worried a little about her sliding off the roof, but it was obvious she was quite surefooted and would be okay. I made it to school on time that day too.”

The other story I love (please don’t write me nasty, mean emails) is the story of Ruth driving down the mountain to go to town with her five kids to get lunch at a fast food restaurant. Franklin was pestering his sisters. We’ve all done it or lived through it in our cars with our kids. The whole “Mom, he’s on my side!” or “Mom, she won’t turn her music down!” or “Mooooooom, she’s touching me!” car craziness. As a child, I said several of those phrases. As a parent, I’ve refereed a zillion car episodes.

When Franklin was causing chaos in Ruth’s car, she pulled the car over and told Franklin to get out. She walked him to the rear of the car, opened the trunk and put him in. I LOVE THAT WOMAN! And not only did she drive with her son in the trunk, when they got their food, Ruth opened the trunk, handed him his food, and closed the trunk.

There were many car rides I would’ve loved to put a kid in the trunk of a car. If only I had a car with a trunk. Or not been afraid of going to jail.

“I put my disobedient kid in the trunk of the car…”

The reason these stories stuck with me is because Ruth was a strong mom who fought for her kids while her husband was fighting for the lost in the world. Ruth was the daughter of missionaries to China. She knew the high stakes her husband was fighting for when he left for a crusade. She stayed at home and raised five kids while her husband traveled the world sharing one simple message – “For God so loved the world that whoever believed in him would not perish but have eternal life.” (John 3:16) God loves you. That was his message.

Ruth could’ve been angry or bitter for being left at home on a mountain with five kids – one very rebellious – while her husband was jet-setting the globe, dining with dignitaries, the powerful and the famous. But she wasn’t. She nurtured her children and raised them to be God fearing and God followers. She was a force for her family.

I have spent many an hour, day and week parenting alone. Granted, my husband wasn’t holding crusades for millions but he was doing what he felt called to do for our family – provide. And the best way for him to do that was for me to parent, alone, during those times apart.

For the mama who is worn out or feels left out, rise up in spirit and strength. Stand up for your family. Be a strong woman. Don’t worry about everything being “equal.” Be a woman who is a helpmate for your husband.

Now the Lord God said, “It is not good (beneficial) for the man to be alone;

suitable and complementary for him.” Genesis 2:18 Amp.

Be the woman who is a helper to her husband. Be the balance  – the counterpart who is suitable and complements who he is. I know that isn’t a politically correct concept these days but it is important to honor your man. And be the wife he wants to come home to.

If you are a single parent, you still need to be strong for your children. I realize you have to be both mom and “dad” and it is incredibly difficult – but be encouraged. You can make a difference for your children.

My thanks to Ruth Bell Graham who not only supported her husband and his ministry but raised children who are continuing to shape and change our world. 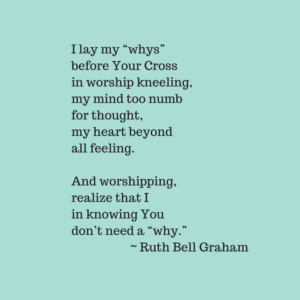 If you haven’t read “Rebel with a Cause – Finally comfortable being Graham” by Franklin Graham, you should. And check out his ministry here.