For the past several months in addition to thinking about privilege – which I wrote about here – I have also been contemplating leadership. Two brothers gave me a clear picture of leadership.

Brother #1 played football in high school. Every day he and his buddies suited up and ran unto the practice field. They sweated and froze – often at the same time since it was in a Northern state. The coach was the type who would try to motivate the team by yelling at them that they were stupid, slow, useless or whatever other negative words he thought to bark at the players. He yelled so much the boys thought he might pop a blood vessel in his head. 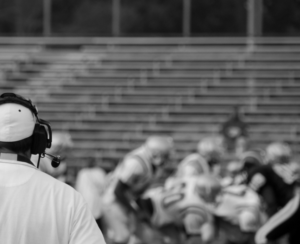 Brother #1 was not motivated to do better when the coach yelled at him and his teammates. He was demoralized and wanted to walk off of the field and throw his shoulder pads in the trashcan on the way.

Brother #2 played football for the same coach. When the coach would yell at him, his response was, “Oh yeah! I’ll show you!” and then he would get up and run faster and hit harder. The loud, abusive coach motivated Brother #2, making him a better player.

So, two brothers coached by the same coach – with different levels of motivation. On reflection, Brother #1 thought his high school coach was the worst he’d ever had and Brother #2 thought he was the best.

My husband and father played football in high school and college so I’ve questioned them about different coaches they had throughout their days on the gridiron. We talked about the coaches who motivated by encouraging instead of going into a tirade.

Here’s the deal, I believe everyone wants to be encouraged for their efforts and will respond positively. They will be motivated. I also believe there are a LOT of people who are disheartened by the coach – or leader – who tries to motivate by pointing out a weakness or shortcoming. To be a good leader, shouldn’t we strive to motivate all  – not just those who “can handle it?”

Speaking of football, Tony Dungy is known as someone who had the ability to motivate his players by his “Quiet Strength” – the title of his book. While other coaches were about to burst a vein in practice and on the field, Coach Dungy remained calm. He and the teams he coached experienced great success. Coach Dungy was the first head coach to beat all 32 NFL teams, only missed going to the payoffs twice while head coach at Tampa Bay and was the first black head coach to win the Super Bowl.

Tony Dungy was able to motivate and win by quietly and courteously leading. That makes him a big winner in my playbook.

Jesus led by serving. Oh, I know he got angry and turned over tables in the Temple but people, he only did that once. That wasn’t His normal MO. Jesus washed the feet of His followers as a sign of serving. He loved those around Him by showing kindness, understanding and compassion. He didn’t coerce or berate people. He loved and served people – and ultimately died for humanity.

And how you lead matters.

Ultimately, a leader is not judged so much by how well he or she leads,

but by how well he or she serves.” Kevin Cashman

Leadership. We need more positive leaders in the world today. Leaders who will serve.

Side note for my non-sports fan readers: It’s Super Bowl weekend and Tony Dungy’s former team – the Tampa Bay Buccaneers is playing. For you avid sports fans, do you think the culture Dungy established at Tampa Bay still stands?