Way back when we used to travel with ease, before life came to a screeching halt because of a virus, I joined my husband on a business trip to Milwaukee. As a non-beer drinker, I won’t lie and say I wasn’t a bit concerned when I heard we were staying at a hotel with the words Brewhouse in the title. I envisioned a stale beer smelling hotel. But I was wrong. I guess paint can cover a lot. 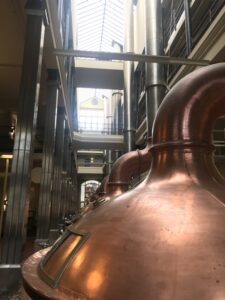 The boutique hotel turned out to be a pretty cool renovated brewery – the original Pabst Blue Ribbon Brewery for you PBR fans. They took out the beer but left the massive copper brewing kettles. And I mean massive!

The rooms were industrial and my millennial daughters would have thought the décor was the coolest – if they used words like “coolest.”

The hallways were weird with lots of steps – in the hallways. They aren’t your get-off-the-elevator-and-walk-to-your-room-Holiday-Inn-type hallways. For those like me who pack 2 weeks’ worth of clothes for a 2 day trip, the hallways were a work out. Down a hallway, down two steps, walk a little bit then up some steps. No need to visit the gym on that trip. 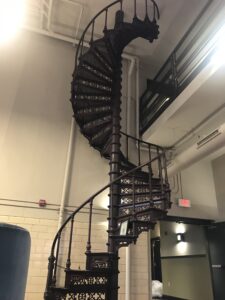 The hotel had several interesting details and funky spots but one in particular stopped me in my tracks – a stairway to nowhere. The winding, spiraling iron staircase with its intricate design went up two stories and then just ended at the ceiling. When I first came across the staircase I was standing at ground level and thought I had found another unique spot to explore but when I looked up and saw the stairs went nowhere, I was disappointed. 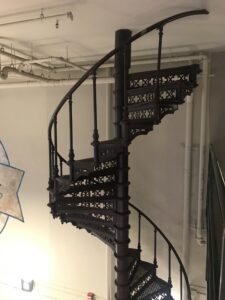 Have you made plans that didn’t work out? Have you failed to make plans for fear they wouldn’t work out? Have you taken a career path only to realize you are on the wrong path? Are you a mom who thinks you’re not accomplishing anything because your kids aren’t behaving how you wanted them to – whether a toddler who keeps pooping her pants or a teen that rolls his eyes yet again? Is infertility causing you to take the steps but you never reach the landing called parenthood?

Stairway to Nowhere. Have you climbed it?

In their hearts humans plan their course, but the Lord establishes their steps.  Proverbs 16:9

When I first heard a sermon on this verse, it gave me such relief. I had held two incorrect beliefs. One, I always thought I had to do all the things to make things happen. Two, I thought if I got it wrong, I was sunk. This verse helped correct my wrong thinking.

Proverbs 16:9 showed me that when it comes to plans, the Lord and are partners. I’m making a plan and taking the steps I need to take but He is going before me, walking beside me and coming behind me to give direction.

Commit to the Lord whatever you do, and he will establish your plans. Proverbs 16:3

Because I am partnering with the Lord in my plans, I’m not afraid of the Stairway to Nowhere. Even if I ascend the stairway and hit my head on the ceiling, I know I can climb back down and look for another stairway. Or maybe I’ll jump on a train or hitch a ride with a friend. Either way, the Stairway to Nowhere doesn’t have to be the final step.

Tell me if you’ve had a Stairway to Nowhere moment.