When I was in college, I got in a car wreck and, apparently, the insurance company for the guy that ran into me  – sending me to the hospital by ambulance where I got over two hundred stitches – wanted to give me some money so I would not sue them for a whole lot more money!

I was getting ready to graduate from college, get married and enter the “real world” so I did what every down-to-earth, logical girl would do. I bought scuba gear!

Not long after my husband and I were married, we decided to take a scuba diving trip with his sister and brother-in-law to Cozumel.

This was BC – Before Children – back when we both had incomes and no kids to suck our paychecks into a vortex each month. My sister-in-law booked us at her favorite hotel that she raved was a “great deal.”  I should have thought twice about that since they did have kids and their paychecks were already being sucked into the vortex.

The lovely Hotel Aquilar provided us, for a mere $12/night, a mattress curved like a banana, a fan that sparked, a shower that required footwear due to the mold and a girl selling “bottled” water in a jug that we watched her fill from the faucet outside our door.  The up side – we were not going to be spending much time in our room. We went to Cozumel to DIVE!

I tried not to wake the “sleeping” shark and paddled backwards in a panic.  My fins were stirring up sand and my tank was clanging into the walls.  I bumped into my husband who had followed me into the cave to also see the “chin wobbling” creature.

SHARK!  I swam a safe distance away.  My sister-in-law looked puzzled.

Once the dive was over and we were all back on the boat, I questioned her.

“What the heck is this?” I asked as I wobbled two fingers on either side of my chin.

“I wanted you to see the Nurse shark,” she innocently replied.

“Shark!? THIS is the international sign for shark,” I said as I made a fin sign on my forehead with my hand.

“But it was a Nurse shark and they have barbs on the sides of their mouths like this,” she defended as she gave me the two wobbling fingers sign again.

I shoved my hand into my forehead and said, “ SHARK! This means shark!”

“But Nurse sharks can’t hurt you,” she insisted.

“I still prefer to be alerted to sharks. All kinds of sharks. So next time, whether it’s a sleeping, harmless shark or not, always start off with “Shark!”  And I made a fin sign on my forehead again.

I swam into the cave expecting a funny looking fish with wiggly things on its chin. I was not expecting a shark! 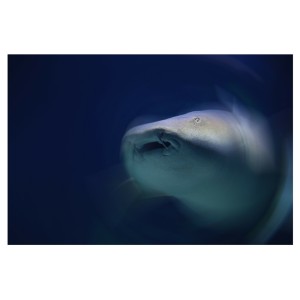 It happens all the time.  We have expectations of how someone will respond – often due to our own hurts, past experiences or insecurities.

I have had to work at balancing communication with expectations.

Do you have trouble communicating with a certain person or type of person?  Maybe expectations are coming into play.

Words kill, words give life; they’re either poison or