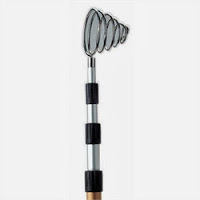 Do you know what this is?

If you think it is merely a golf ball retriever, you would be wrong. This is a Hummingbird Rescue Device!

At least it is in my house – or in my garage!

My last house had an unfinished detached garage. Where there should have been a ceiling, there were just rafters. At the roof peak, my husband installed a fan that automatically came on when the temperature reached a certain point and would suck the hot air out of the garage.

That is great unless you are a hummingbird racing around the feeder and you get chased into the garage. Being the bird that you are, you fly up to escape. Normally, a good idea. Unless there are fan blades turning extremely fast. Then, it is not such a good idea.

I discovered this happened when I was cleaning the garage and found the carnage from a hummingbird-fan blade encounter!

Since I was feeding the birds near the garage doors, I felt a sense of responsibility so the next time I saw a little bird flying frantically in my garage, I knew I must take action. I looked around the garage trying to figure out a way to shoo the bird out the very large hole – otherwise known as the garage door. I tried a broom but that just chased it further up into the rafters – closer to the fan! And there was no way to turn it off!

I needed something with a long extension. I spied the water hazard golf ball retriever and decided to give that a try. Even though it extended quite a ways, it still wasn’t long enough. So I duct taped it onto the end of an old broom. (This girl loves her duct tape.)

Now I could reach up to where the bird was but I could not force him to fly down. The bird’s instinct to fly up was too great. My only hope of saving him was to get him to fly into the golf ball retriever and pull him down. Piece of cake, right? Have you ever seen how fast hummingbirds fly?

I tried over and over again to catch the tiny bird in my trap. My arms were aching and my neck was getting
stiff from looking up for so long.

About this time, one of my girls yelled out the back door, “Mom, it’s time to leave for school and you haven’t made our lunches and we don’t have lunch money!”

“I’m rescuing a bird right now! I’ll write a check on the way to school!”

I returned my focus to the bird that was noticeably tiring. He was sitting on a rafter almost at the peak of the garage. I slowly moved my “bird catcher” up on the other side of the board. He flew right into it! I turned it over so he couldn’t escape and quickly ran out of the garage and released the Hummer. Off he flew! Success!

“Okay, girls! The bird has been saved. Let’s go to school! We don’t want to be late for the first day of
school!”

A few years later, we were at our lake house and while the kids waited for the adults to get the boat ready to go out, they decided to jump off the dock and swim. One of the girls started freaking out (no other word to describe it) when she discovered a bird nest had been built on the boat lift under the boat – and there were baby birds in it! The mama bird was flying around scolding the kids for bothering her babies.

When my husband started to lower the boat – which would have drowned the baby birds, you could have heard the protests in the next county. The girls were screaming and my nephew ran to find me.

“Aunt Shelly, you’ve got to come help save the baby birds!”

We threw around a lot of ideas about how to rescue the baby birds but in the end decided that my nephew and I would attempt the rescue. We got on the edges of the two man tube that we pull behind the boat and sort of rowed it under the ski boat – batting webs and dodging spiders the whole time. The mother bird was flying around chastising us and the human dads were teasingly threatening to just lower the boat and fix the problem. I was trying to keep calm and ignore the spider webs.

When we were directly under the nest, my nephew carefully half stood in the tube and raised a bucket up so it was under the nest. From the other side, I took a pole and shoved the nest. The nest and birds fell into the bucket. My nephew fell back into the tube and I about fell out of the tube!

“We have the birds!” my nephew screamed and the girls pulled the tube out from under the boat.

We found a shallow bowl and carefully moved the nest and birds into the bowl using sticks so our scent wouldn’t be on the birds. Then I took the bowl to the end of the dock so the mama could find them. I didn’t want an animal to get the babies so I got a ladder and put the bowl on top of the ladder. The birds weren’t looking like they would make it and the mama wouldn’t come close. We had tried.

We lowered the boat and took off. When we came back, the mama was in the bowl on top of the ladder with her babies! Success!

Why did I almost make my kids late for their first day of school and delay a boating outing for birds?

I guess if the Lord cares about the birds of the air, I can too!

Look at the birds of the air, for they neither sow nor reap

nor gather into barns; yet your heavenly Father feeds them.

Are you not of more value than they? Matthew 6:26

The God of the universe cares about YOU!

(Disclaimer – if it’s in an armadillo that is tearing up my yard… Well, that’s another story!)

Share the post "Quick, grab that thing out of the golf bag ~ I have a bird to save!"