It’s Wednesday but I’m still thinking about last Saturday. Why last Saturday? Well, last Saturday was the day I watched my brother, Glen, push his wheelchair 13.5 miles to Pikes Peak in Colorado – for the 6thtime. I watched from the driver’s seat of his truck as I followed him for five and a half hours.

Five and a half hours of him hitting the rims of his wheels with his palms. Each time he made contact with the wheels, he was a few feet closer to the top of the mountain. The 14,115 foot tall mountain.

Thought #1 about the push up Pikes Peak 2019: If things are right with our spirit, the mind and body can handle a lot. Even with emotional and physical challenges, if our spirit is strong and healthy, we can soar above the challenges. We will have the strength to move forward and tackle the mountain in front of us.

How do we make sure our spirit is strong and healthy? Stay connected to our Heavenly Father. Spend time with Him. Talk to Him. Read His Word. Worship Him.

But those who trust in the Lord will find new strength.

They will run (or push a wheelchair) and not grow weary.

They will walk (or push a wheelchair)

The week of the Pikes Peak Challenge, my brother got a blister on his hand from simply pushing up a ramp at an airport. We spent the week doctoring it the best we could but since he was training every day, he couldn’t give it a rest. Not to mention, the aggravation to the blister just by the amount of pushing he does on a daily basis.

And then we saw the weather forecast. Rain and snow was predicted. The forecast would make for a miserable time pushing up the mountain.

Late at night before the event, I lay in bed praying for Glen’s safety, stamina and against rain and snow. It felt overwhelming and lonely until I sent up a flare. I texted a few people I knew would pray (and hopefully had their phones on “do not disturb” in the middle of the night.) And I asked Facebook world to join in prayer.

Thought #2 about the push up Pikes Peak: It is important to do life in community. God’s community. We need to have people around us who we can ask to pray with and for us. Don’t try to go it alone. Make sure you have a tribe of people who will lift you up, hold you accountable and encourage you in your faith.

The next day when I saw the texts with encouraging scriptures and read the Facebook comments of people saying they were praying, I was encouraged. And not surprised the sun shone – giving us a gloriously clear day.

Share each other’s burdens, and in this way obey

the law of Christ. Galatians 6:2

I also tell you this: If two of you agree here on earth concerning anything you ask,

my Father in heaven will do it for you. For where two or three gather together

The first time I was with Glen when he pushed up Pikes Peak in 2003, I was one team member among many. The support team for the maiden voyage was comprised of a doctor, a nurse, several medical support staff, a camera crew and wheelchair representative. We had several cars in our caravan and a banner on the truck at the back of the pack warning the drivers coming up on us there was a wheelchair athlete on the road ahead. (You can read more about the first ascent in the book I wrote Pushing to the Peak. Click here for details of how to order it.)

This trip up the mountain was very different. We had a camera crew leading the way since they wanted to get footage to promote their new wheelchair. And then there were Glen’s two girls and I in the chase vehicle (his transportation down the mountain.) At 3:30am, a decision was made to have another guy come along. Bless his heart, he got up, dressed and joined our rag tag support team. He didn’t know any of us very well but ended up playing a vital role on the way up the hill. Not only did he offer water and nourishment, he ended up walking beside Glen most of the way and acted as his braking system every time Glen had to stop because the brakes weren’t working.

Each of us played an important role in Glen’s climb.

Thought #3 about the Push up Pikes Peak: It’s important to have a support team. People who will be there when you need them. They’ll bring the meal, watch the kid, carpool, let your dog out, meet for coffee, go make sure you turned the oven off and locked your doors when you left for vacation, pick you up when your car breaks down – or you run out of gas – and laugh and cry with you.

Two are better than one, because they have a good return for their labor.

If either of them falls down, one can help the other up.

But pity anyone who falls and has no one to help them. Ecclesiastes 4:9-11 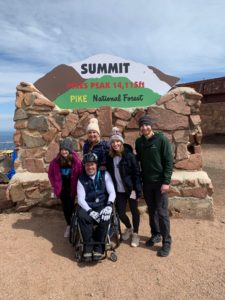