Back in the 90’s, there was a show on cable TV with a homely lady and a geeky guy. I cannot even remember the name of the people or the name of the show. But I tuned in to watch each week. I even programmed my VCR to record the show! And then I went out and tried to emulate the projects they did on the show. This was before we had a kazillion channels with satellite, or HGTV.

I loved one episode where they did a birdhouse themed room so in the kid’s room that was too young to protest, I applied a fence picket wallpaper border, hung birdhouses, painted the room blue with clouds near the ceiling. I loved it. The daughter? Not so much.

The Craft gods must have been watching us stay at home mommies watching that cheesy show because the next thing we know – BAM! HGTV! And we were glued to the screen to figure out how to craft our homes into some amazing show home for pennies on the dollar. And then another channel popped up.

But these shows were geared to us “older folks.” While we “older folks” were trying to paint and stamp and sponge ourselves into a wonderful home, the Craft gods were watching. And they created Pinterest. Actually, Pinterest wasn’t created as a crafting, decorating, DIY site but most everyone I know uses it that way.

The week of my oldest daughter’s wedding.  Why? 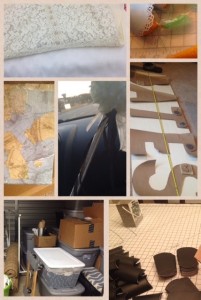 Before Pinterest, Mothers-of-the-Brides-to-be just bought their daughter three or four of those big, thick wedding magazines. That was enough to give you some ideas and pass them on to the cake lady, the florist, and the seamstress.

Information Overload. Or should I say, Idea Overload. Maybe too much of a good thing is  ~ too much.

All of the ideas are beautiful but it makes the decision making process lengthy and difficult.

The wedding is two days away so I think it is safe to put away my craft supplies and concentrate on the joyous day!

Okay, I don’t really hate Pinterest. Maybe after the wedding, I’ll have time to Pin. #pinterestfordummies

One last note, because of Pinterest and my daughter’s amazing knack for creativity, her wedding will be much more lovely and beautiful than mine!