With the beginning of a New Year, my Facebook feed, email inbox and even the snail mail was filled with New Year’s resolutions suggestions.  I’m being assaulted with “let’s start the year out right” Bible reading plans, Bible memory plans, healthy eating plans and goal setting plans.

Don’t get me wrong. I’m all about participating in programs that motivate me to live a better life. In the past, I’ve started out years determined to follow the “Read through the Bible in One Year.”  I’ve committed to memorize a Bible verse a week. I’ve started diets the day after the ball dropped. And I’ve stayed committed – until about March!

But I haven’t given up. This year I’m doing an online “One Month to Live” study. I can do a month, right? I’m several days into this study and so far I’ve determined that if I only had a month to live I would eat a LOT of pasta with cream sauce, I wouldn’t do ANY laundry and I would NOT exercise! For those of you now worried for the salvation of my soul, let me say that I am getting some good out of the study. Don’t you worry about me.

But seriously, a few weeks ago, I attended a funeral that made me really think about resolutions in a new light.  The woman that was celebrated that day was only fifteen years older than me. I didn’t know her. But I know her daughter.

As I sat there and listened to her family and friends honor her and talk about the impact that she had on lives around her, I was challenged. Fifteen years. What if I knew I only had fifteen more years to live? And they would be healthy years. How would I live differently? What would I do?

So many times, when people receive bad news about cancer or sick heart or an incurable illness, they decide to make the best of the time they have left. More often than not, they don’t have the health to pursue their goals and dreams because of chemo, or a surgery or other debilitating condition. 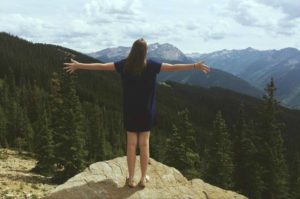 Tim McGraw sang about sky diving, Rocky Mountain climbing, bull-riding , loving deeper and forgiving sooner.  His words challenged us to live like we were dying.

We are all dying. It’s just a matter of when. So why not live that way before we get the death sentence? Before our health runs out?

As I drove away from the funeral and in the days that have passed, I have contemplated the question, “What if I knew I only had fifteen more years to live and I would have my health during those years? How would I live? What would I strive to accomplish?”

So often, people don’t live that way until they only have a short time to live. But what if, just what if, I had fifteen years? Fifteen years is a long time to accomplish a lot of things.

I could get another degree or two.

I could raise a foster child.

I could start an orphanage in Africa.

I could learn to paint – okay, maybe not that one. Or maybe I could. George W did.

I could travel the world.

I could help someone else travel the world.

I could start a business.

I could volunteer in a myriad of different places.

I could write a book – or ten of them.

I could do a lot of things.

If you knew that you had fifteen healthy years, would you do anything differently?

Would you go skydiving or Rocky Mountain climbing? Would you love deeper? Forgive quicker?

How would you use fifteen years to make an impact? A month is probably not enough time to make a lasting impact. A year may not be either – depending how it is spent. But ten years is. And fifteen definitely is.