Several of my friends are facing very hard things in their lives right now. These trials reminded me of my beach day… Stay strong and brave, friends!

Last spring, my husband and I were fortunate enough to be taken on a trip around the coast of Spain. We didn’t really know anyone on the trip very well so one day we found ourselves at the beach by ourselves. I wanted to go to the beach but my husband – I’ll call him Jack (because, well, that is his name) – did not care to be at the beach but I was loving it.

The beach was a public beach and Jack was being a bit of a beach snob. It was a little shocking to realize that tops were optional! And girls that should have been wearing skirted bathing suit bottoms thought thongs were a good idea. Yikes!

Even with the non-American crowd, I was thrilled to dip my toes in the Atlantic Ocean. Jack fussed about the sand and pretty much sat in one place. I dropped my shoes with him and took off down the beach. 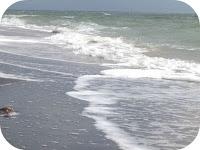 I walked along the beach where the waves hit the sand so that I could gather seashells. I’ve always enjoyed gathering shells when I go to the beach. Maybe its because of my name – or maybe it’s because the shells represent God’s amazing creation. And reminds me that He cares about the creatures of the sea – and me.

When I was eighteen years old and weeks away from moving 3,000 miles away from my family and friends to attend college, I walked along another beach looking for sand dollars. I had a few broken sand dollars in my cup as I prayed to God. I told Him of my fears and anxieties of the unknown. I asked for a reminder that He would be with me.

All of a sudden, sand dollars were washing up at my feet!

I know it sounds cuckoo but within a few minutes of my petition, whole sand dollars were literally at my feet. I don’t know if the current suddenly shifted or if I just happened to step into sand dollar cove but my cup was soon full of whole sand dollars! Actually, I believe God did that for little ol’ me.

Okay, God, I hear you! You care about me and the things that I care about. Thank you!

As I walked on the Spanish shore, I said a similar prayer. You see, within a few weeks of my return home, my twenty-three year old daughter would undergo a preventative double mastectomy. I shared about that HERE

I was relieved she had made the brave decision to have the surgery but I am her mom. And moms worry about their children.

I had not shared with many people about the surgery during the months leading up to it. Some I did share with questioned the decision so I became fairly judicious with whom I told.

As I walked along the Spanish shore, I felt alone and burdened.

I knew I would have to be strong for my daughter and so I had a little conversation with God as I casually picked up seashells.

In Spain, no one but me seemed to care about gathering shells so the shore was littered with shells. Big, whole shells. I was in shell heaven. Not only could I quickly fill a cup, but I could be choosy and only pick the prettiest shells. The shells were diverse and abundant and very non-American.

I stopped walking for a minute and looked out at the vast ocean and all of a sudden I felt my soul rest. If the God of the universe can paint pretty shells, control the tides of the oceans and, yet, knows the hairs on my head, I could rest.

I was reminded that my strength comes from the God of the universe. Alone, my strength falters and fails but His strength is unending and as constant as the waves that crash on the shore.

Wave after wave crashed at my feet. Time after time, the Lord has shown me His strength in difficult times.

The journey with my daughter started over a year ago took an interesting twist when her reconstruction had to be delayed a year because God interrupted “the plan” and sent a little girl to my daughter and son-in-law. Tomorrow, August 21st, my granddaughter, Bravery, will be present as the process is completed. Well, not literally present at the surgery.

Wave after wave. The Lord is good, and faithful and constant.

If you are facing a hard thing, rest in knowing that God is faithful.

I look up to the mountains; does my strength from mountains?

No, my strength comes from God,  who made heaven and earth and mountains.  Psalm 121:1-2 Msg

You rule the oceans, you subside their storm-tossed waves. Psalms 89:9 NLT

Tell me of a time God met you “at the beach” and reminded you of his faithfulness.