Hey! Remember me? It’s been about four months so you may have forgotten. When I started my blog, oh so many years ago, it was called Chuckles in the Chaos. I said I would only post about once a week. Well, the past few months have been filled with chaos. Some of it I cried about but some of it gave me reason to chuckle. There wasn’t time to write about it or even to figure out what message I wanted to relay.

A writer friend of mine who saw the tears and heard the chuckles encouraged me to make note for future writings. I told her she would have to remind me because the chaos was great and if I wrote anything down, I’d never find it.

This story I remembered. Probably because I messaged her in the middle of it. I actually propped up the phone to show her and said, “There might be a blog in here somewhere.”

When I last sent my words into the blogosphere, I mentioned some changes were coming and I was not ready for it. Some changes came quicker than I planned. We sold the house we built and loved and moved to another city. We are sort of settled. There are some pictures on the wall and the dogs seem content.

I won’t tell you about the drama and trauma of the move. Okay, I might tell some of it but not now. If you follow me on social media, you know there was the lampshade debacle and the “how many ramekins are too many” post.  If you were a neighbor you might have witnessed the purging of the ice chests and the tent setting up”just to check it” marriage threat.

Today I’m going to talk to you about contact paper. I know, edge of your seat stuff. Hang in there. It’ll get better than just “contact paper.”

Before I start my story, you should know the first thing I do when I move into a home (or help move my kids into a home) is put down contact paper. I don’t know why other than I saw my mom do it and she probably did it because her mom did it and her mom probably did it because she bought it with her green stamps she earned from buying the new-fangled healthier for you than butter product called margarine – which we all now know was purely yellow plastic chemicals that turkeys won’t eat.

The boxes were packed. The movers were scheduled. The only thing left to do was clean.

I wiped down the drawers in the girls’ bathrooms and gave the contact paper a tug. Out it came. As suspected and planned.

If you are like the others who have heard my contact paper woes, you’re probably wondering why I didn’t just wipe it down and leave it. That was probably the best choice but once I started ripping out the paper shred by shred, I was committed. Why I didn’t leave it might have something to do with the fact that I’m a “good is good enough” type of gal so the half inch in the back of the drawer didn’t bother me. But I wouldn’t like some perfectionist to move into my home and then tell the neighbors what a poor job I did putting the paper down and wondering how in the world I lived all those years with it like that.

That’s a whole other blog that has some important marriage lessons in it but I’ll stick to the sticky contact story. 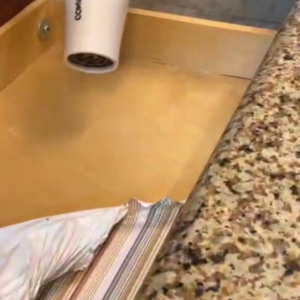 I knew there must be an easier way and after some Googling, I confirmed it. All I had to do was get a blow dryer to heat up the paper, the glue would release and, presto, the paper would come up.

It required a little more effort than “presto!” But not much. Soon I had a mound of crunchy used contact paper and good as new drawers.

As I was burning my fingers with the heat of the blow dryer and my fingers on the other hand were cramping from slowly pulling the paper, I thought two things. One, never put contact paper down again and two – sometimes if we let things stay as they are for too long, they are hard to get rid of.

If we don’t deal with things in our lives like unforgiveness, bitterness, complacency, offenses or sin by any name, it is hard to remove.  It doesn’t have to be a transgression or bad habit we hang on to for too long. Sometimes we stay in a job or a dangerous relationship too long. Maybe it’s a wrong mindset keeping us stuck.

Like my contact paper, we get stuck and it takes more effort to clean up the mess. It’s best not to get stuck. But how do we do that?

Some call it “keeping short accounts.” Basically, it’s the idea of dealing with the issue at the time so a little thing doesn’t become a big thing. Address the comment, look, text that is offensive at the time. Don’t let the anthill become a mountain.

“Since God chose you to be the holy people He loves, you must clothe yourselves with tenderhearted mercy, kindness, humility, gentleness and patience. Make allowance for each other’s faults, and forgive anyone who offends you. Remember the Lord forgave you, so you must forgive others.” Colossians 3:12-13

“And don’t sin by letting anger control you. Don’t let the sun go down while you are still angry, for anger gives a foothold to the devil.”Ephesians 4:26

I know, so many words. So let me end with this. Make the change now. Don’t let “it” go too long. Bad situations don’t usually fix themselves. If you need help to get unstuck, get help.